The Silhouette seating collection designed by Luca Scacchetti is more than just a general shape. What remains in our minds is the profile of its form, with the combined shape and shadow creating the silhouette. The design remains outwardly anti-static, with an almost uncertain equilibrium due to the apparent lack of physical contact between the seating and back. This double silhouette is repeated between the outside frame in natural or lacquered wood, and the inside cushion covered in leather or fabric. This double repetition acts to underline, as if to rivet the image of the slim profile in our minds, where technologies and elegance meet to create a general lightness of the ensemble.

Winding lines, crossing between the shapes of a boomerang and the shapes of the wing of a bird, are brought back to paper in their essential geometry, with nearly Leonardesque traces.

High, medium or low elements on a sliding spoke, or tubular frame, or a single steel pole can be utilized to build a family of desks and conference tables of every shape and style. They can also be used in public places like bars, restaurants, lounges or hotels to propose solutions with great elegance for seating that appears almost flying or hanging.

These executive, conference, and tub style arm chairs have a frame consisting of different elements. The seat, back, and arm rests are made of multi-ply beech wood, formed in a mould and joined together by an appropriate joint of hinged milling with a double “S”. The upholstery on the inside is realized through the use of expanded CFC free polyurethane foam cold formed in precise moulds, and then it is applied to a layer of Baydur 60 polyurethane cold formed inside of another mould. These are then bonded to the multi layer frame using polyurethane glue with a catalyst.

The inside of the seat is always upholstered in either leather or fabric. The outside, however, has different options, and can be ordered:

The seating consists of a firm CFC free polyurethane cushion, completely upholstered in leather or fabric.

The arm chairs are equipped with a swivel tilt and lift mechanism with gas hydraulic dampening, and the base is die cast in aluminum with a high polish on the upper portion, and black lacquered on the lower section.

Go to the i4Mariani for more information 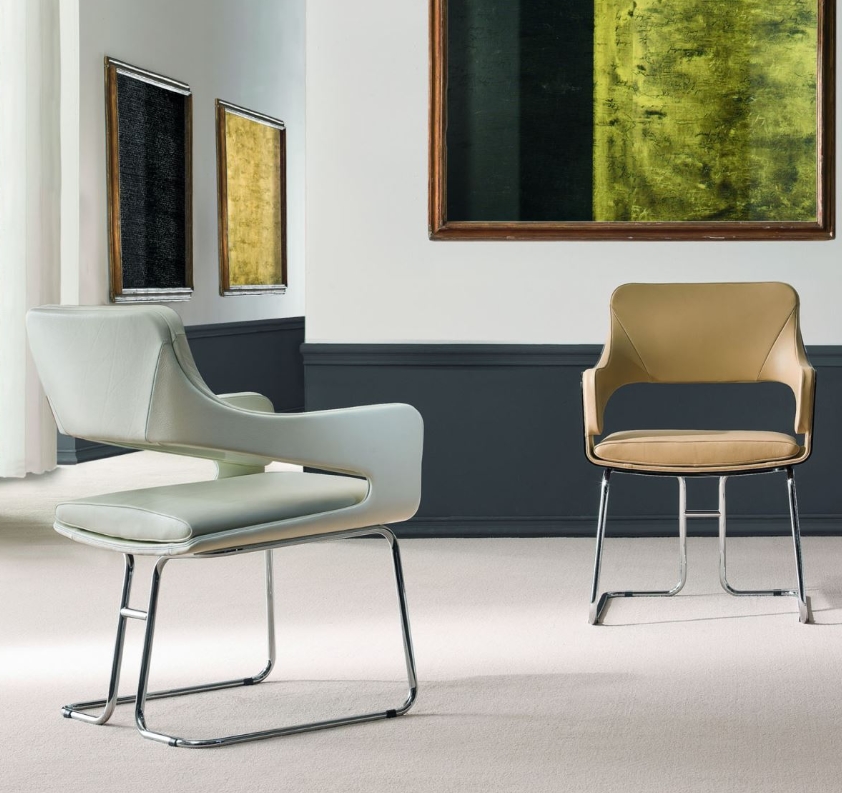